Indviduals have an impact! 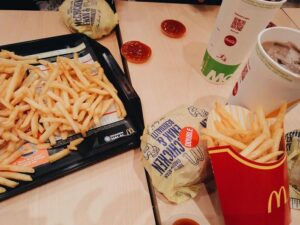 On November 1, 1990, McDonald’s announced that it was replacing foam food packaging with paper packaging. And it stopped using foam packaging for hot beverages in 2012 after receiving pressure from As You Sow, a non-profit that promotes environmental and social corporate responsibility.  Here is an article from 2018 that talks about how a group of kids created corporate pressure to make this happen: http://chej.org/2018/01/11/mcdonalds-decades-later-eliminates-foam-everywhere/

McDonald’s latest attempt to be more environmentally responsible was to eliminate plastic straws in favor of paper straws.  “In May 2018 McDonald’s in the UK started phasing out its plastic straws in favour of paper ones, in response to a petition signed by nearly 500,000 people asking the company to stop using plastic straws.” (source: wired.com) .  This is still a work in progress.  The first attempt were straws that were too thin and disintegrated quickly.  The second attempt produced a straw that is not easily recycled.

Adidas’s Efforts to be Environmentally Responsible

In 2017, Adidas started creating running shoes made from ocean waste.  They sold over one million pairs of these in 2017 alone, demonstrating that customers care about shopping at responsible companies.

Abercrombie took on a more wholesome image in 2016 to appease consumer demands.  “As part of the about-face underway at its namesake label, Abercrombie’s designs and marketing will now focus on its shopper’s “best self and inner confidence,” Chief Merchandising Officer Fran Horowitz said Tuesday.”  (source: cnbc.com)

Make a Difference.  Be an Owner.

StockSquirrel empowers its users to make a difference OWNING a piece of the companies where they shop. What do you care about?  Share with us on social media #StockSquirrelESG